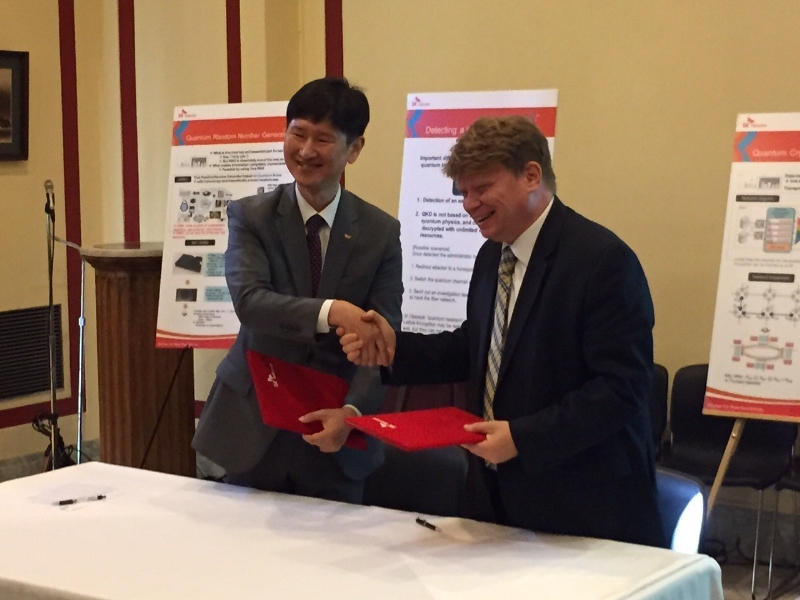 The International Transportation Innovation Center (ITIC) in Greenville, S.C. has signed a Memorandum of Understanding with SK Telecom to collaborate in the development of quantum cryptography technologies. With the rise of the Internet of Things (IoT) in an increasingly connected world, cryptography technology is being touted as a possible solution to a whole new set of security challenges in the IoT era. Under the MoU, ITIC and SK Telecom will jointly develop and pursue standardization of hacking-prevention technologies to protect connected vehicles.

The International Transportation Innovation Center (ITIC) is creating one of the world’s leading testbeds to validate secure networked transportation technologies. SK Telecom is the operator of Korea’s largest mobile network and leads the world in the development of quantum cryptographic technologies.

Developed in 2011, SK Telecom’s Quantum Crypotography System is the most secure encryption method, using quantum physics instead of mathematics-based encryption algorithms commonly used today. That is, it securely distributes a secret key to legitimate parties. Here, a key is a table of random numbers shared by legitimate users in such a way that the information is known only to them, and secure means secure against any possible eavesdropping, which is the highest level of security. The system is expected to enhance security of critical network infrastructure.

Currently, most IoT systems, including the connected vehicle ecosystems, use software-based pseudo random number generators for encryption, meaning that they can fall vulnerable to hackers who decrypt the sequence of digits. Once developed for commercial use, SK Telecom’s technology will eliminate such concerns for security as it generates true random numbers based on hardware.

Following a demonstration of the technology in Washington on Tuesday, ITIC Executive Director John Hopkins said, “The ITIC team is excited to partner with SK Telecom on this important technology breakthrough. Once developed for commercial use, it will leapfrog the security level of automotive software applications – both on the vehicle and the infrastructure side.”

Also present at the demonstration was U.S. Representative Joe Wilson (R, S.C.) who said, “It is my honor to learn about SK Telecom’s quantum cryptography technology. As technologies develop, cybersecurity is becoming more important than ever. Considering the close relationship between Korea and the United States, I hope we can collaborate in the area of advanced cybersecurity.”